It is not a testament to your choices,

This life I choose to lead.

It is a testament to my strength.

Yesterday I tweeted about seeing Neil Gaiman at an airport once.  I was glowing that day, I remember it distinctly, the feeling of the light beaming from my face.  A man was sitting at a table to my left, facing me, so my view was of the food court and runway and his view was of me.  When I finished eating I stood up to throw my trash away and I looked over at him and to my surprise he didn’t look away (as most people do).

Instead, he ran his eyeballs up and down my visage like he was trying to remember or understand something.  Enthralled?  Enchanted?  Annoyed because I was blocking his view of the airplanes?  I didn’t know.

I smiled at him.

I am sure I only stood in place for two seconds, maybe less, but an entire universe exists inside that two seconds. If time has ever stood still, it did then.  I studied him for a moment in response to his studying me.

He had longish hair and a black jacket that was faded, a little bit more gray than black now and it appeared to be a bit too big for him.  He had wavy dark hair that fell a bit above his shoulders.  He was older than me, but I wasn’t sure by how many years.  His face said that he had lived, but not enough just yet.  He looked studious, although I may have thought so only because I was, in that moment, the sole object of his deliberation.

I was fascinated by the way he was looking at me.  I don’t know if he was watching me so intensely because he found me odd, or amusing, or because he had found something in me that he recognized in himself.  I suppose in this day and age it almost seems a bit unusual for a human to notice another in that way.

I threw my trash away and without turning around to look at him again, made my way to my gate.  It was a pleasant moment, and as I sat silently on the flight to Nashville gazing out of the small oval window, I kept replaying it in my mind.

Falling in love with strangers.  Watching them fall in love with you, just for a moment.  Going about your lives as if something extraordinary hadn’t just happened – as if you didn’t glow from the inside out, as if the interesting-looking man in the sad gray jacket hadn’t recognized your soul. It’s all so romantic and tragic and yet completely benign.

Life moved on, as it tends to do, and I mostly forgot about it.

Years after the airport incident, I picked up my first Neil Gaiman book.  I had been watching Lucifer for a while without making the connection to him, and I saw an ad for a TV show that seemed part mythology, part Sci-Fi, completely perfect for me.  It was called American Gods.

I have this odd habit when I see a preview for a TV show or movie that intrigues me – I immediately look to see if there is a book.  I would rather buy the book and read it than dive into a new television show, or at least read the book first.  (The book is always better, you see.)

So I purchased American Gods (the book), and then Fragile Things (a collection of short stories), and others, and Neil quickly became one of my favorite contemporary authors.

I finally saw a photo of Mr. Gaiman somewhat recently, while scrolling through one of my social media feeds.  There he was.  Instantly I had a flashback to the airport and the curious stranger in the black-ish jacket who had seen me radiating light.  Was it him?  I can’t be sure.  It’s possible I imagined the entire encounter, and the man at the airport was simply staring at something in my direction.

Whatever the case, it’s a good memory that I sometimes revisit, although I’ve never told anyone about it until yesterday.  I would like to think that by liking my story, Neil Himself (whose twitter handle is actually @neilhimself) nodded in appreciation – and perhaps recognition – of our pleasant, albeit momentary, meet.

Did you know this is an annual thing?  Well, the cool kids knew.  And me. I also knew.

For me, Batman Day really means it’s Michael Keaton Day, because Michael Keaton is the BEST Batman ever.  A quick scroll with the tv remote tells me that at least 4 cable channels agree with me, as they are currently running a loop of the Keaton films that will undoubtedly go on all weekend.  No such thing as too much Michelle Pfeiffer in red lipstick and leather, so I doubt anyone is complaining.

There’s so much to appreciate about the MK Batman movies, I hardly know where to begin.  I have been in a mood today so let’s begin with his mouth.  If you’re going to cover up approximately 97 percent of your body with latex and leave your mouth showing so that you can speak and scowl and whatnot, it needs to be a pretty damn impressive mouth. 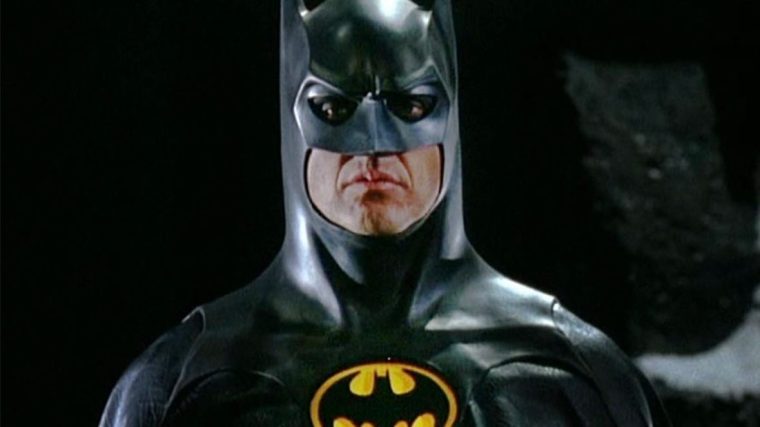 For all his handsome broodiness, Christian Bale does NOT have a pout like that, I’m just saying.

Secondly, Michael Keaton’s Batman was campy and fun.  He told great jokes and was able to have a laugh at himself.  It’s like he KNEW this shit was comic books, man.  He wasn’t trying to get all philosophical about it, he was just there to bust some noses, spend some Wayne Enterprises money, and kiss the pretty girls.  I admire his simplicity.  Jack Nicholson is so enjoyable as the Joker that his performance elicits giggles of delight.

And finally, the reason I hold Michael Keaton up as the Batman Standard which all other Batmen have failed to measure up to:  Well, this guy says it better than I can , but Keaton’s Batman’s whole purpose was wrapped up in his alter-ego. They weren’t so easily separated as Christian Bale’s version.  He wasn’t ALSO Bruce Wayne.  Bruce Wayne in the Keaton films was a regular guy who lit up and came alive when he answered the call to save Gotham.  I get goosebumps just thinking about it.

So Happy Michael Keaton Week, everyone.

I hope you get the opportunity to sit down with your loved ones tonight and watch Batman, followed by Batman Returns, a cinematic masterpiece starring one of the sexiest set of lips that has ever graced the big screen.  And also Michelle Pfeiffer’s.

This is so funny and I had nowhere to post it, so here you are…

…and I don’t really have anything further to add to that.

((not my art, artist unknown))

Too much, too much

So I crawl down into

And sit, and sit