Skipping around the corner

Of the old schoolhouse

My fingers traced the rugged brick

I saw you there and

My face burst into sunbeams.

You remember that day,

I thought I’d missed you

My soul poured out of every crevice.

You told me I am radiant when I smile

I didn’t tell you then

No one else has seen it like you have

My inner fire, my essence

Blinding light only you inspire.

Thanks to everyone who has supported the book! If you haven’t already please get your copy here and keep my enterprise going!

In other AWESOME news, I have a new podcast! It’s called the Fear Itself podcast and it’s available on iTunes, Google Play and everywhere you listen to your favorite podcasts.

Please have a listen and please subscribe and support! We are already reaching a good amount of people with the truth about healing anxiety!

I wrote a book.

Not just any book…I wrote THE book.

The one that’s been on my heart for years.  The one I was put here on Earth to write.

The Story of My Life

I published it myself on Amazon.

Please check it out.

If you or someone you love suffers from Anxiety or any other Mental Illness, it may help.  Even if it doesn’t, I hope you find your own path to healing.

Although well known and oft-repeated, that’s actually a misquote.  Thoreau wrote, in Walden, that “The mass of men lead lives of quiet desperation.” Here is the full quote, in context:

The mass of men lead lives of quiet desperation. What is called resignation is confirmed desperation. From the desperate city you go into the desperate country, and have to console yourself with the bravery of minks and muskrats. A stereotyped but unconscious despair is concealed even under what are called the games and amusements of mankind. There is no play in them, for this comes after work. But it is a characteristic of wisdom not to do desperate things.

Thoreau was talking about the void we all feel and the common impulse most humans feel to try and fill it with material things.  Walden is a journal of sorts, detailing his time in the woods and away from modern society, searching for inner peace and finding himself and new perspective there. 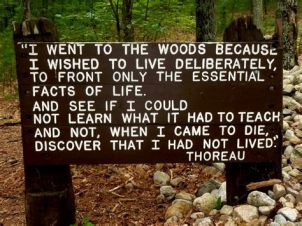 A friend and I were discussing this “quiet desperation” quote last night, as we discussed our respective marriages and marriage in general.  Our conversation focused on the complacency that occurs after years of seeing the ins and outs and annoying habits of another human being’s existence.  I think it’s so common for husbands and wives to leave the runway together, aimed for the stars and the experience of a lifetime, only to land early on a makeshift dirt runway in a place just outside Settle Town, USA.

Is that obnoxious? Maybe so, but you get what I’m saying.  If most new brides and grooms begin the marriage with the best of intentions – which I believe is the case – how do so many of us end up in a ditch somewhere, disoriented and disheartened at what our lives have become?

I’m not even talking about 10 years in, guys.  I myself have been married for 9 years, but the trouble started brewing quite a while ago and I don’t think we’re unique in that.  I talk to so many men and women – friends, colleagues, acquaintances – who are at most, content in their marriages and at worst, extremely unhappy and in some cases, depressed.  Most of them are not seeking divorce.  They just want to live their best lives and they want to do it with a willing partner who shares their interests and passions.

[Side note: For some reason, whenever I hear the term “quiet desperation” in my head the Queensryche song “Silent Lucidity” starts playing.  Interestingly, the song is about lucid dreaming, which is being able to consciously control what happens in your dreams.  So in a way, it’s related. ]

The “quiet desperation” quote came up discussing marriage because my friend and I were connecting on some shared issues.  The others I’ve spoken with relate to the same issues and experiences, too.  Even though all these people are having this same experience, none of them (none of us) are really talking about it.  It’s a secret struggle.  There is so much irony in something so commonplace and universal being something we hold inside and keep to ourselves and work to camouflage on social media.

Let’s don’t lead lives of quiet desperation any longer.  Let’s start talking to each other, and communicating with our spouses, and stepping outside the confines of the rules of marriage if that’s what it takes.  The only time that exists is the present, and it’s crap to waste it wondering if we are loved, wondering if we had married someone else, would we be vacationing in Mykonos right now instead of stuck at home washing dishes for an ungrateful partner.  That’s not life.  That’s not what life is for!

So how to we get back in the air?  How to do get out of Settle Town and back en route to our dreams and wildest fantasies (hopefully together with our chosen partners)?  Honesty!  Speaking our truth!  I think we all have to learn to be uncomfortable for a moment in order to be blissfully happy for a lifetime.

Believing we are alone is what fosters our desperation.  In truth, nothing is singular and everything is shared.  We are all connected.  We are all pieces of the same consciousness having several different (but oddly similar) human experiences.  As Thoreau said, we would be wise not to do desperate things.  We would be wise to realize that we are not alone, and the future is what we make it.

I’m rambling, so I’ll leave it there.  Namaste and happy Monday!  XOXO